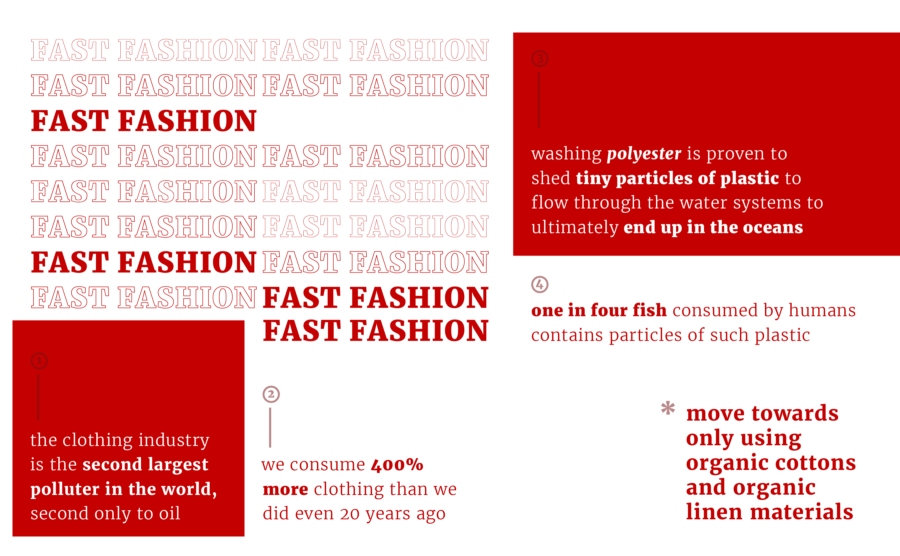 When people ponder effective ways to help put a stop to the expanding pollution epidemic, solutions such as recycling and reducing water usage comes to mind. Did you know paying close attention to the clothing you buy can just as efficiently impact the environment around us?

The earth’s resources are increasingly deteriorating over time, but many do not realize how large of a role current fashion plays in pollution control. In fact, “The clothing industry is the second largest polluter in the world … second only to oil,” according to Eileen Fisher, American clothing designer and environmental award winner.

The concept of “fast fashion” is a growing trend of cheaper quality clothing production to achieve a higher quantity, and at a much quicker rate. Popular brands such as Zara and H&M are guilty of falling into the fast fashion trend to keep up with modern day demand for new affordable looks.

Are you guilty of falling into the fast-fashion trap? Many people are today in the world where technology places thousands of outfit choices and accessories easily purchased with the click of a button. However, overfilling that online shopping cart was not always the trend. The average number of newly purchased clothing items today has tripled since the period of the1960s, according to renowned fashion expert and graduate of Columbia Law School, Maxine Bédat.

“There has been a radical change in how we consume clothing,” Bédat tells “The True Cost.” “We consume 400 percent more clothing than we did even 20 years ago. At the same time, we’re spending less money than ever on the most clothing we’ve ever had. This has been done by fast-fashion companies cutting corners, using cheap material, constructing a cheap product and using cheap labor.”

The source of cheaper clothing contributing to much of the world’s pollution from modern fashion today is a result of the prominent implementation of polyester material clothing, rather than cotton in the 1960s. What is the problem with substituting polyester for cotton? Polyester is an energy-intensive, polluting plastic made from fossil fuels that are now in more than half of clothes distributed.

Walking into a room to an overflowing laundry basket may be a norm for many people today, but what goes into washing that favorite shirt is creating a bigger impact on the environment than one might think. Washing polyester is proven to shed tiny particles of plastic to flow through the water systems to ultimately end up in the oceans. According to a recent study from the University of California, Davis and Hasanuddin University, one in four fish consumed in the US contains particles of such plastic.

“Meanwhile, the U.S. has highly advanced systems for collecting and recycling plastics,” says Susan Williams, a professor with the UC, Davis Bodega Marine Laboratory. “However, most Californians wash their clothing in washing machines, the water from which empties into more than 200 wastewater treatment plants offshore California.”

Reduce, reuse and recycle are three words reiterated in the news over decades, but now paying closer attention to the materials in the clothes you buy can help save the earth accordingly. Many name brand companies such as Eileen Fisher and Ralph Lauren are making an effort to move towards only using organic cotton and organic linen material.

“Because (the fashion industry is) the second largest polluter in the world I also think we can be a huge force for change,” Fisher says. “I have hope. I know it’s possible to make clean clothes, to do it a better way.”

Keeping recent scientific research in mind, and go green by being an environmentally savvy shopper this season.