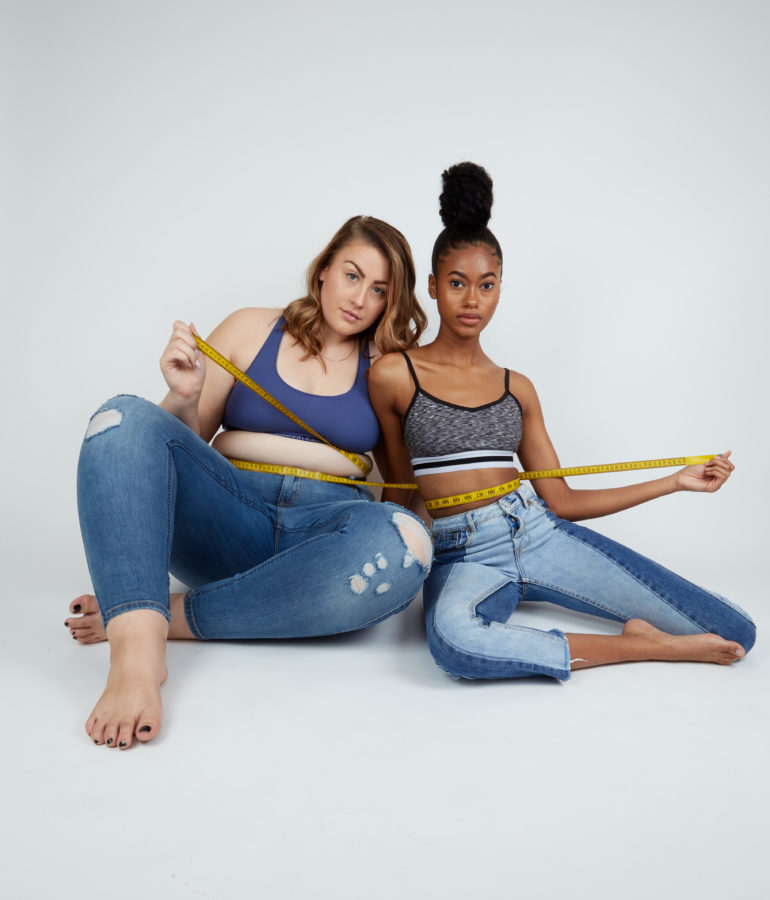 American society is built on the idea that to be thin is to be beautiful. It’s ingrained in our minds from a young age that if you’re thin, you’re worthy; if you aren’t thin, then you are dieting to one day become worthy.

This idea is readily apparent in the media we consume. Television shows and movies like Shallow Hal, Friends and Norbit have storylines built on the idea that thin is beautiful and other body types are undesirable. One of the most disturbing things about the media and society’s warped body image is that we push these ideas on our young children. Even with new, younger programming like Insatiable, dangerous expectations can get projected onto viewers. Senior fashion merchandising major Erin Miller recalls going on her first diet at an exceptionally young age.

“The first time that I had started feeling uncomfortable in my skin was around … 11 years old,” she says. “I developed faster than girls in my grade so I felt bigger, even though I was a mere size zero. I would work out in my basement every night and watch what I ate. Even my parents had some type of reward system, where if I lost weight we could get ice cream or things like that. It was instilled in my mind at a young age that I needed to be thin.”

And it’s not just her. Common Sense Media’s 2015 research study on children, teens, media and body image found that by the time kids are seven years old, one in four have engaged in some type of dieting behavior.

The fashion industry (the second largest enterprise in the world and one of Kent State’s most treasured areas of study) is also heavily involved in promoting an arbitrary and unattainable body image. In the Fashion Spot’s Fall 2018 diversity report, it was recorded that out of all four cities in the fall 2018 fashion month, only 30 plus size models walked. While those numbers may seem like a slight improvement upon previous fashion months, it’s important to note that out of those 30 models, 19 of them were divided between only two labels: Chromat and Christian Siriano.

Although Miller says pursuing a career in the fashion industry hasn’t influenced her body image, she sees it affect her peers self esteem often.

“It does not affect me,” she says. “But I have seen other girls affected by the fact that the expectations can be so grueling on your self esteem.”

On top of society and the fashion industry’s unrealistic body standards, comes the social media overload. We see the models, celebrities and influencers who paint unrealistic pictures of what a beautiful body is. As an adult, it’s easier to understand what you see online is not real life, but what about the little girls and young teenagers seeing these posts everyday on their feed? The need to be as perfect as the models they follow can become overwhelming.

In Common Sense Media’s 2015 research study, it was found that 80 percent of teen girls compare themselves to images they see of celebrities and within that group, almost half said the images make them feel unhappy with their own appearance.

Miller says that she sometimes has to disconnect from social media because it can cause her to question her own self-worth.

“Being on Instagram and looking at pictures of bodies and beauty that seems unachievable can be a little disheartening from time to time,” she says. “Sometimes I need to put my phone down because I start to get deep into Instagram comparing myself to others and thinking, ‘Where did I go wrong?’”

Miller says after she started listening to her body and eating the right foods, she began to feel better not only physically, but mentally too.

“I found positivity in myself when I started taking care of my body– working out, going to yoga, or going on walks with my boyfriend,” says Miller. “Putting better foods into my body didn’t make me feel sluggish or bloated and definitely didn’t make me guilty. Once I changed my habits physically, the mental part began to follow. Once I was better mentally, I found myself not so concerned about other people’s opinions and just decided to live my life authentically me.”