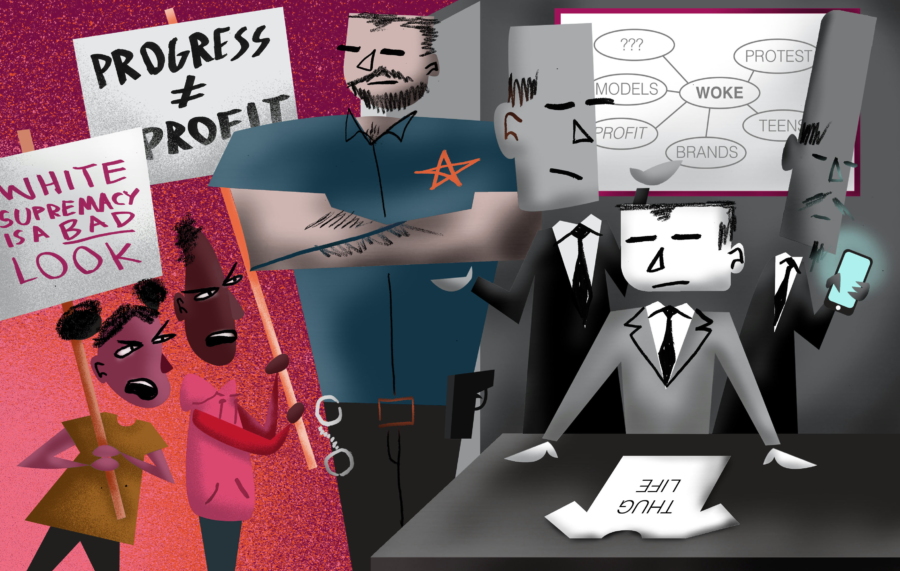 From H&M’s “Coolest Monkey in the Jungle” sweatshirt to Dolce & Gabbana’s Shanghai advertisements, it truly feels as if fashion companies are checking off a list of the different communities they plan on upsetting every year. Coverage on cultural and racial insensitivity in fashion make headline news practically every month.

But why do fashion companies fall into these controversies to begin with? Haven’t they witnessed the negative fallout from other brands in similar stints? Don’t their apologies and statements regarding diversifying their companies mean anything?

Truly, the crux of these incidents are conversations that need to occur between fashion corporations and their audiences. There must be more dialogue about how these incidents affect individuals, and furthermore, whether fashion needs be more conscious of its impact on the consumer and the world.

To start off these timely conversations, A Magazine sat down to discuss these issues with junior fashion merchandising majors Ashlynn Thompson and Tyrone Berry, and junior fashion design major Rachel Christian.

What is your initial response when you hear about these incidents?

AT: I come to expect it now because it has happened so often and for so long. As hard as it is to say, this industry has been quite insensitive and ignorant to marginalized groups like black people and people of color. It just really speaks to what the core values of those brands are.

TB: It’s between irritation and nonchalance, and I think that it is because it happens so much. It makes me think about who’s on these marketing teams, how this even gets passed and really what the overall structures of these fashion organizations are like. Are there just no people of color at all throughout the entire chain of processing?

RC: Generally, I look at it with skepticism. I don’t want to overreact and get upset about something if it is just a misconstrued situation. Although, when these situations truly prove to be offensive or insulting, I do get really disappointed.

Knowing that fashion companies like Dolce & Gabbana, H&M and Viktor & Rolf (as well as individuals of fashion houses like Tommy Hilfiger) have been problematic and even racist in the past, how do you feel about these brands and fashion icons, especially as a person of color?

AT: After reading Gucci’s apology statement last week it made me think, “Is diversity really at the core of your brand with every decision that you make?” If you have to go through all of these levels of decision-making to be able to put this out onto the runway and for it to be sold, it really doesn’t seem like diversity is your main focus. Diversity is such a hot issue that everyone is trying to jump on the bandwagon but no one really believes it at their core.

TB: I just want to know why cultural insensitivity and lack of diversity is happening yet again. Why was there no push for diversity back then with some of these incidents, and why is there a push for it now? It really feels like diversity is becoming a trend. All of these organizations want to push diversity because they are realizing that people of color are where the money is, and that we are actually a majority of the population.

RC: I take it case by case. For example, upon reading Stefano Gabbana’s comments about Chinese people, I was horrified by it. Dolce & Gabbana are not a faceless brand. Knowing who Dolce & Gabbana are and what they stand for, I wouldn’t buy anything from them afterwards.

In the case of H&M with their “Coolest Monkey in the Jungle” situation, I don’t know anything about their head designers or design team. It was definitely also a situation that should have never happened, but I am not trying to villainize them. That incident is not representative of the company as a whole.

If you could say anything to these fashion designers, houses and brands that have made these mistakes, what would you want to tell them?

TB: I just want to see change. I want to see more people of color inside of of their work spaces and internships. I want them to be more knowledgeable, more aware, and really immersed into their customers’ lives because they really do have such a wide variety of customers.

RC: Be honest, transparent, compassionate and intentional as a company. It is your job as a company to think about each person that you could be touching, as well as the wide spectrum that that represents. Also, own up to your choices. If you feel that you didn’t wrong anyone then stand by that. Own up to your actions, and deal with the consequences no matter what they might be. If the whole world thinks that you’ve committed a major sin, then be willing to lose billions and more.

What do you wish to tell your fellow POC in the fashion industry?

AT: I would say just try and be a part of that change that you want to see. Work your way up to become that executive that can affect that change. You’re more powerful than you think you are. If you are ambitious enough and work hard enough, you really can affect change in this industry.

RC: I would say thank you for struggling to get where you are. Unfortunately as people of color, we don’t get the choice to represent ourselves just as individuals. Therefore, I would also encourage the POC community to define themselves by whatever they want to, not by what others will see them as or define them to be.

Do you think that designers should have lines or boundaries when they create?

AT: As artists and designers, I know that you don’t want to limit yourselves because that limits the creative process. However, it’s just about being aware and knowing that it isn’t creative freedom when you’re hurting a marginalized group or trying to belittle one. I definitely think that there is a line between having creative freedom and being culturally insensitive.

The statement, “Why is everyone so sensitive? It’s just clothing,” is something that is seen and heard often enough when these fashion controversies occur, what do you think of this statement?

TB: Are we more sensitive, or are we more aware? I feel like our generation is more aware and we aren’t taking the nonsense that our elders took. We just speak out more. It’s about awareness and respect, not sensitivity. With these brands, they’re the ones being insensitive and pushing out content in which they don’t care or realize can hurt certain communities.

What do you think are the steps that are needed to propel fashion forward?

RC: We need to show more people of color at every level in the fashion industry, doing anything and doing everything. This will slowly change the ideas on the limitations that we think are there. Even if these limitations are there, we’ll be more encouraged to challenge them.