how to beat acne: getting comfortable in your own beautiful skin 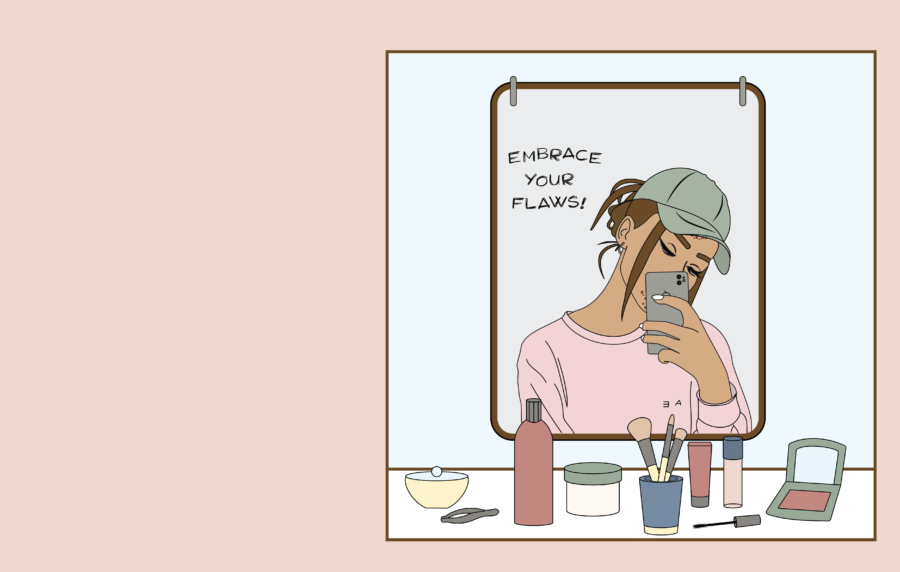 Everyone hates middle school. The awkwardness, bodily changes and embarrassing outfits haunt our memories, but for me, I especially remember the worst thing that came from my middle school days: acne.

I have struggled with acne since my preteen years and, while I have now learned how to manage it, it took a significant toll on my self esteem. It got worse over the years and I reached a point where I desperately tried anything to get rid of my acne. I used different face washes, scrubs, creams and ointments to no avail. If anything, my skin got worse from the chemicals I roughly rubbed into it.

My confidence plummeted and I withdrew from conversations and gatherings in an attempt to hide the fact that I had acne, which is a completely normal part of growing up. While it is largely an unavoidable aspect of puberty, I felt like I was the only person in my school with a flawed face. I turned to magazines that featured stunning women with seemingly flawless, glowing skin because I longed to look just like them.

As I got older, I listened to the magazine’s advice and began experimenting with makeup. I watched endless makeup tutorials on YouTube and learned how to cover up my acne, which led to my passion for makeup. Despite this passion, I felt like I had to cover up my troubled skin since all I saw in magazines and on social media were clear, oil-free faces.

I wasn’t alone. Researchers Ann Kearney-Cooke and Diana Tieger found that about 50% of 13-year-old girls reported being unhappy with their body and that number grew to 80% once the girls reached 17 years old.

While the perfectionism portrayed in magazines and many Instagram posts can negatively impact people’s self esteem, there is a push against this seen through the growth in body positive movements and campaigns. Social media has increasingly been used to share messages of love and support to people of all body types which spreads positivity and allows people to feel more comfortable in their own beautiful skin.

Instagrammers such as Em Ford (@mypaleskinblog), Sahur Saleim (@sahursart) and Kadeeja Sel Khan (@emeraldxbeauty) have all shared their experiences with acne and have helped normalize and destigmatize it. As makeup artists, they each spoke about the pressures they have faced in today’s world of social media and the strict beauty standards women are often subjected to. By speaking up about their experiences, more women, including myself, feel heard and accepted.

This surge of body positive messages helped me feel more comfortable in my own skin and focus less on my imperfections and instead embrace them as a part of what makes me unique. While my middle school self hid behind her hair hoping that no one would look at her, I wish I could tell her that it only gets better and that middle school’s crushing awkwardness, as well as the shame of having acne, ultimately passes.