the past, present and future of the ‘made in italy’ label 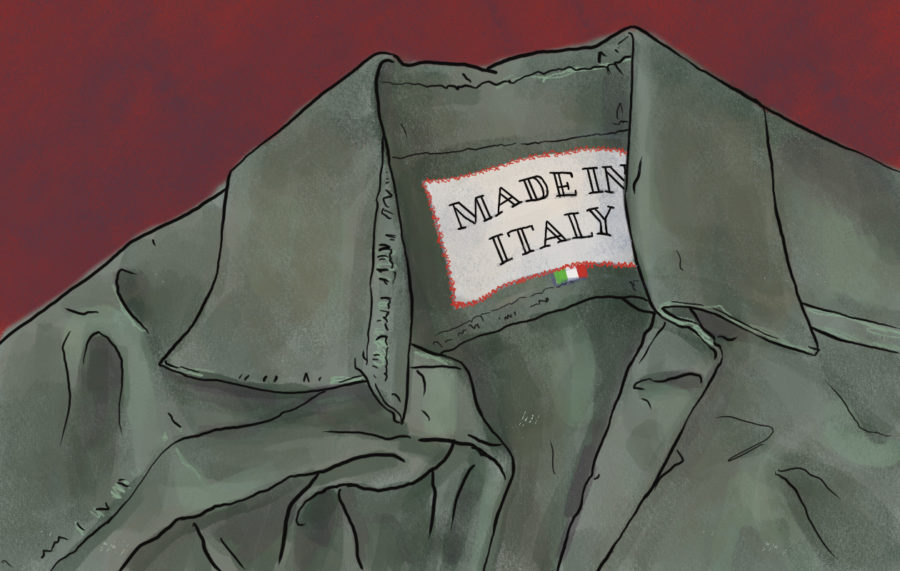 The “Made in Italy” label is synonymous with products of the highest quality and authenticity. From the post World War II era, the country has gained international recognition for its fashion innovations and elegant sense of style. At Kent State University, students have the privilege to study abroad in Florence, Italy: the home of the Renaissance and the muse of many fashion brands. While abroad, students are required to take classes on Italian language, fashion and culture where they are further introduced to the “Made in Italy” label.

Professor Patricia Kinsella is the on-site coordinator of the Fashion Program at the Kent State Florence Campus. She currently teaches Italian Fashion and Culture, Planning and Buying and the Florence Orientation class. Kinsella moved to Italy from the United States in 1985 and began working in Prato, Italy as a textile curator and freelance designer before joining the Florence Kent Campus in 2010. She defined the “Made in Italy” label as “an artistic tradition transformed into a contemporary style closely identified with Italian lifestyle.” Through her class Italian Fashion & Culture, students are introduced to the history of Italian fashion; from its humble beginnings in the 14th and 15th centuries to now.

Dr. Francesca Passeri is a professor of Comparative Media Systems at Kent State University in Florence. Two of her many research interests focus on communication and branding strategies in the Italian fashion system and a comparative study of media systems between the U.S. and Italy. She currently teaches The Luxury Market as a fashion elective and lectures about the impact of the “Made in Italy” label on luxury brands. In her opinion, “‘Made in Italy’ refers to many intangible and tangible characteristics that can be identified in high quality, strong links to experienced and specialized industrial districts, elegance, propensity to innovation, creativity.” She goes on to add, “‘Made in Italy’ refers to factors such as fashion, food and beverage, automotive, furniture, nautical sector, pharmaceutical, jewelry, fabrics, textile.”

Exploring the Past
“Fashion” was born in Italy in the 14th and 15th centuries when the newly rich urban merchant class copied the feudal aristocrats that held power during the Middle Ages. However, after the Black Death reduced the European population by a third of its inhabitants, the commercial elite became the main patrons of the Renaissance and subsequent fashion. During this time period, dress was used not only to display wealth but to display status, dignity, occupation and occasion. Luxurious clothes were often associated with virtue.

Women’s fashion during this period consisted of four layers: Chemise (Camicia), Dress (Gamurra), Over-dress (Giornea) and the Cloak (Mantello).  These layers were exposed with various techniques to highlight the luxurious excess of the fabrics. Unfortunately, women were excluded from public life and kept at home. Therefore, they only had a few outfits for various occasions.

When asked if elements of the past can still be found in the Italian fashion scene today, Passeri noted the importance of the Renaissance in defining the intangible characteristics of the “Made in Italy” label.

“Fashion was probably the first to establish itself at international level and the first to appropriate the Renaissance as an ‘intangible asset,’” Passeri said. “Also, a centuries-old tradition of refined craftsmanship and an infinite history of excellence in the artistic field, whose products have made of Italy a species of great museum that educated the population to a “sense of the beautiful” through constant contact with works of art.”

Italy’s famed craftsmanship started during the medieval period, as the Mediterranean was the center of the trade world. The Italian economy grew due to the country’s proximity to trade routes and rising urban classes. Additionally, there was no Italian monarchy, so the merchant class grew in wealth. Due to Italy’s proximity to trade and natural resources, cities within the area grew to find their niche. For example, Como is known for its silk printing, Biella for its fine wool textiles, Prato for its fashion woolens, Le Marche for its shoe making and Florence for its leather goods. This expertise is still relevant to its city of origin today.

The fascist rule of Benito Mussolini beginning in 1922 created a turning point in both Italian fashion and culture. Mussolini’s goal was to restore Italy to its glory during the time of the Roman Empire. Before his rule, the Italian elite frequented Paris for fashion and favored brands such as Lanvin, Chanel and LetLong. The Italian fashion board (Ente Nazionale della Moda) was founded in 1935 and based in Turin, also home to the royal family and motor industry. During the same year, Mussolini invaded Ethiopia causing trade embargoes and sanctions. This period was known as Autarky. Italy struggled during this time as they have no true natural resources or raw materials. Textiles such as viscose, made from wood and canes, Lanital, a fiber made from a milk derivative, and Cafioc, a cotton substitute, became popular during this time period as designers worked with what they had.

The birth of Italian fashion began after WWII, with the fall of both Hitler and Mussolini. During the Reconstruction period, factories in the North were able to resume production and meet consumer demand. Elite dressmaking came from the post-war era with artisan and aristocratic designers like Sorelle Fontana and Emilio Pucci. Giovanni Battista Giorgini was an Italian fashion buyer and entrepreneur that gained prominence during this time. On Feb. 12, 1951, he organized the first international collective Italian fashion show. It featured 180 outfits from 18 designers such as Carosa, Fabiani, Simonetta, the Fontana sisters, Schuberth, Vanna, Noberasco, Marucelli and Veneziani. The show was a success, attracting the attention of American buyers and journalists and pushing Italian designers into the spotlight.

Elements of the past can be a gateway into the future for Italian brands. Professor Kinsella expands on this point, saying “many Italian fashion brands draw heavily on the cultural heritage of the country and regard both the artistic and artisanal traditions as an essential part of their brand identity.”

Research taken from Italian Fashion and Culture notes and lectures by Professor Kinsella.

Creating the Present
Currently, Italian production companies are utilizing new innovations and sustainable practices to set themselves apart from the rest of the world. In a class trip to Milan and Prato, Kent State Florence fashion students were able to see these innovations first hand. For instance, while in Milan, students were introduced to C.L.A.S.S. (Creativity Lifestyle And Sustainable Synergy), a global platform on a mission to make the fashion and textile business smarter. The company’s workshop in Milan worked on finding natural ways to innovate using 3D printing and embroidery.

In addition to furthering innovation, Italy is putting a strong emphasis on community. During the ongoing COVID-19 pandemic, the Italian Trade Agency (ITA), a governmental agency that supports business development of companies abroad, built a digital platform called EXTRAITSTYLE that allows brands to connect directly with an American audience of buyers, retailers, press and end-consumers. The platform launched on Sept. 24 with 80 virtual brand boutiques. This business-to-business forum will also enable brands to interact directly with buyers and retailers in the U.S., pre-screened by the ITA. This supports the “Made in Italy” label by promoting the effortless luxury found in Italy with seamless integrations and quality products.

Social media marketing has a huge impact on the present and future of Italian fashion brands. Chiara Ferragni took the internet by storm when she created her fashion blog, The Blonde Salad, back in 2009. Now regarded by Forbes as the biggest fashion influencer in the world, Ferragni is leading the way for other influencers to start their own blogs, and eventually their own brands. The Blonde Salad became The Chiara Ferragni brand when she launched her clothing collection in 2013. The Harvard Business School did a case study on Ferragni in 2015 to study her business model and international success. Ferragni, like many other influencers of the time, is using her platform to promote discussions and offer her support for various causes. During the pandemic, she partnered with the Uffizi Gallery for a photoshoot with Vogue Hong Kong. Before the photoshoot was released, the influencer posted a photo of her at the gallery and encouraged others to support their local museums. In the digital age, influencers like Ferragni are essential to move the conversation forward. Professor Passeri wrote an article on this collaboration, noting that the meeting between Ferragni and the Uffizi Gallery is not “a simple sum of factors” but, “a multiplication of values that concerns country branding and the still unexplored potential to communicate Italy globally.”

Looking Towards the Future
The future of the “Made in Italy” label is uncertain. A Vogue Business article from 2021 titled “Italian fashion’s changing of the guard” points out the shift in Italian luxury brands as they work to infiltrate the Asian market. Additionally, Italian family owned heritage brands are seeking the capital necessary to compete and grow in a competitive international market. When asked about the future of the “Made in Italy” label, professors Passeri and Kinsella reflected the same challenges. Kinsella pointed out that some of the most famous Italian luxury brands are no longer in Italian hands. Gucci is owned by French conglomerate Kering; LVMH is the majority stakeholder in Fendi and has recently acquired full ownership of Pucci;  Versace was sold to Capri Holdings (Michael Kors) in 2018. Further complicating the integrity of the “Made in Italy” label is a 2010 law known as the “Reguzzoni-Versace Law,” which aims to assist Italian companies facing international competition due to globalized production. This allows products to be labeled “Made in Italy” as long as the last part of the production process takes place within the country, undermining the value of the label.

Passeri noted that the “Made in Italy” label is also facing several challenges in “counterfeiting, Italian Sounding products, delocalization of production [and] parallel districts that take advantage of the territory to label their products as ‘Made in Italy’ when they are not.” Despite these challenges, the label still maintains its position in brand awareness. She adds, “The words ‘Made in Italy’ evoke in consumers’ minds attributes that positively characterize the image of Italy as a country—in particular, the attributes of creativity, aesthetics, quality and sophistication; all these characteristics create the perception of a differential value through the effect of the product country association.” Ultimately consumers desire the “Made in Italy” label as it provides a heritage and value to its consumer that they are unable to find anywhere else.

They say you must understand the past in order to shape the future. Italy and its brands have persevered through a lot of challenging times and come out on the other side with a label that spells out luxury across the world. If the future bodes the same, Italian luxury brands and the “Made in Italy” label will continue to see growth.